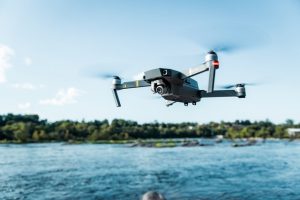 The Federal Aviation Administration (FAA) defines drones as unmanned aircraft systems (UAS). There are many different categories of drones including military, recreational, commercial, and surveillance drones used by local law enforcement. The FAA has defined these categories, offering guidance and rules for each. In 2013, drone integration into society rapidly accelerated due to legislation that required the FAA to incorporate drones into domestic airspace. Technological advances—including video and infrared image capable cameras on drones— have equipped governments with the increased ability to surveil citizens. While some governments are using drones as surveillance technology, there is ongoing debate on whether to regulate this under privacy law doctrine or traditional property law.

Following the passage of the 2012 FAA Modernization and Reform Act, the ACLU pushed a privacy agenda forward. The ACLU emphasized how potential abuse of this technology could lead to a surveillance state in its statement addressed to the Senate Judiciary Committee hearing.

Still, the ACLU raised valid privacy concerns about drones potentially being used as surveillance vehicles. Without responsible and ethical regulation, law enforcement agencies may use drones for surveillance unbeknownst to the public, potentially creating a chilling effect in public spaces and paving the way for discriminatory targeting. For example, the Boston Police Department employed the use of  drones without notifying anyone, including local officials who would have to approve the purchase of such drones. The Baltimore Police Department took it a step further when they planned to launch an Aerial Investigation Research (AIR) program, which came the closest to creating a surveillance state. More recently, the Department of Homeland Security used drones to surveil on Black Lives Matter protestors in several U.S. cities.

However, there is a counterview that drone technology is not a privacy issue and accordingly, should be regulated through property law. The 1946 U.S. Supreme Court decision in United States v. Causby held that private landowners “exclusive control of the immediate reaches of the enveloping atmosphere.” While the term “immediate reaches” has not been defined in statute or case law, Causby establishes that “a landowner owns at least as much of the space above the ground as he can occupy or use,” even if he “does not in any physical manner occupy that stratum of airspace or make use of it in the conventional sense.” The Supreme Court has allowed surveillance from “public navigable airspace” by law enforcement from 1,000 feet with an exception at 400 feet for model aircraft and helicopters. [1]

The FAA regulation permits flying at 500 feet above the land. Drones most likely would operate at 400 feet and the below airspace. [2] If legislators were to follow a property rights approach, landowners would have the right to exclude aircraft, persons, and other objects from a column of airspace extending 350 feet above the surface of their land. [3] This would provide the property owner protection from surveillance of both UASs and manned aircraft. Currently, the FAA has been the main voice in controlling drone usage, imposing rules, and regulations. However, at least 44 states have enacted bills addressing UASs.

Regardless of whether advocates see this as a privacy rights issue or a property rights issue, both sides generally agree on the following recommendations to regulate law enforcement use of drone technology: